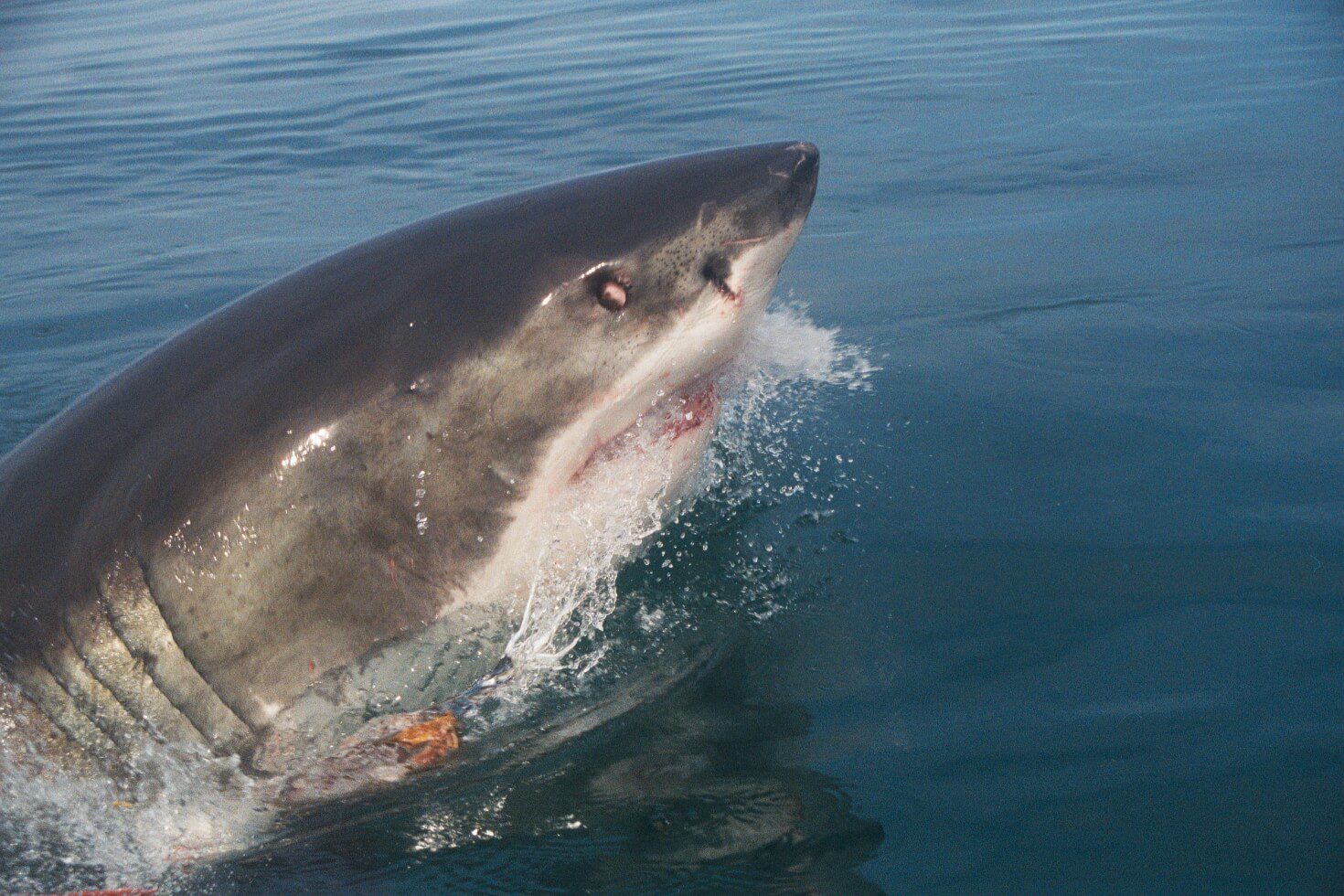 By Shane from "The Cage"

Shane Marriott
Experience
January 14, 2009
This is another old post of mine from a trip to South Africa in 2003. As one of my most exciting adventures, it really fits in well!

It’s early… too early for me in fact. The alarm is buzzing 4.45AM and I am sliding out of bed towards the clinical hotel bathroom in an attempt to get my eyes open. I have but 15 minutes to get cleaned, dressed and downstairs to the lobby before the courtesy bus arrives to pick us up. Thats the moment when I wake up… wide eyed and very excited… I am going to see great white sharks and dive in a small cage to do it. This is going to be an experience!

I met some friends in the lobby, collected a packed lunch that had been organised the evening before, and set off in the bus. It was a 2.5 hour drive from Capetown to Klein Bay which is described as ‘the’ place for shark diving. I think I managed to get some sleep on the way but anxiety kept me firmly awake for most of the ride. We arrived at about 8.30 and were offered a very welcome coffee. It was then just a case of sitting around for a while as various boats get trailered into the water. There were going to be a lot of different people out there hoping to see sharks. One point made quite clear from the start is that sighting a shark is not guaranteed… I think this was made for the benefit of the by-line that stated something about no refunds will be given… fair enough! 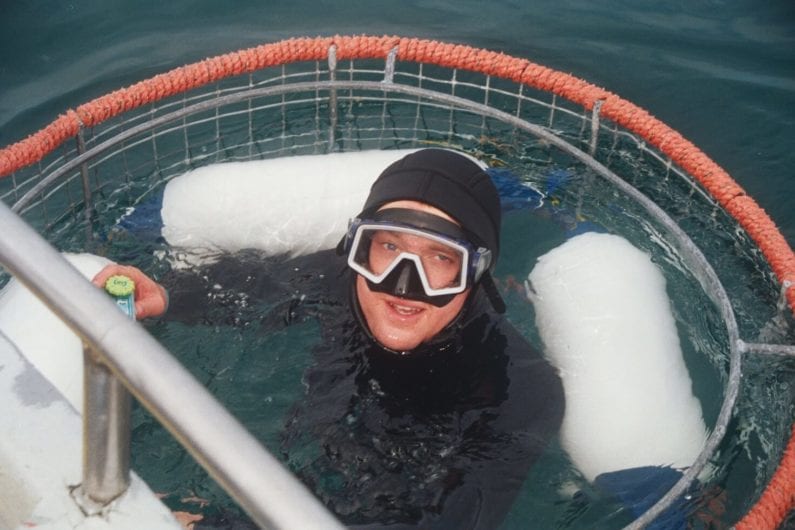 We eventually climb on board and looking over at the cleaner boats with the solid cages made from welded together panels, I start to feel a bit nervous as I look back to our well-used boat with the flimsy cage and its outer skin that was zip-tied on. This is no joke, the thing was held together with small plastic strips. I use a lot of zip ties at home but I was a bit wary of relying on them to keep the sharks at bay. As it turned out, our captain for the trip is renowned in the area for his experience and knowledge of the sharks. We had a small talk about the sharks in general and how we would attract them to us with fish guts. 15 minutes of high speed motoring and we arrive at our location.

The engines are stopped, the cage lowered over the back and some foul smelling bait thrown into the sea. Wetsuits are dealt out to anyone that fancies going for a swim. Then we wait, everyone eagerly staring into the sea hoping to get the first sighting. Using the heads (toilet) proves to be an experience as it is confined in a space about half my height, how I freed myself from the wetsuit I have no idea. We see a flock of birds; the weather warms up, but no sharks. An hour or so after we arrive, we see a fin break the surface of the oily fish gut trail behind the boat. The first guy that had been waiting in a wetsuit for an hour gets into the cage. A ’small’ 3-meter shark swims past and has a look at what is on offer; he circles the boat and decides there is nothing of any interest. At this point the battery died in my digital camera; it had been on charge all night except the South African sockets are so insecure, the convertor must have pulled itself out. About 10 minutes after this unfortunate incident, a slightly larger shark swam under the boat. 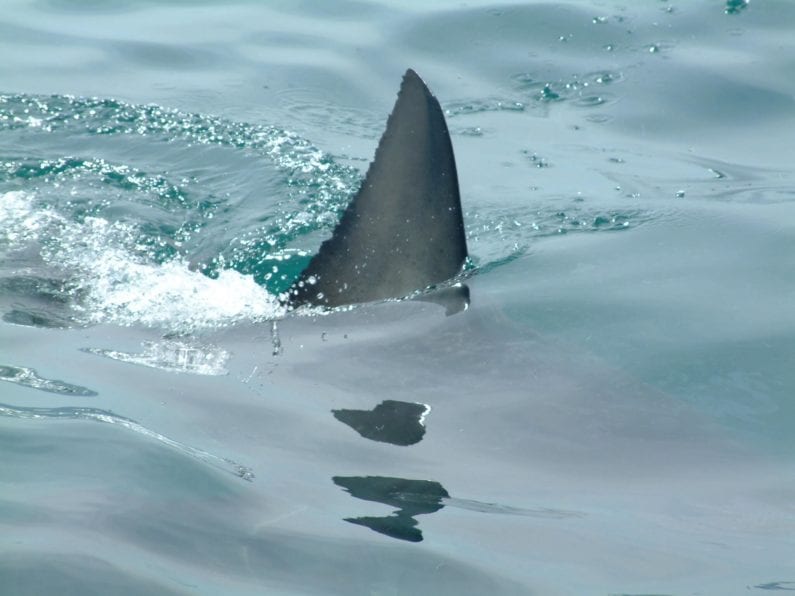 At about 5 meters long, it was easily viewable on both sides of the boat simultaneously. People cycled in and out of the cage as the crew repeatedly convince the shark to try to catch the bait just one more time before ripping it out of the way… I can almost feel the anger and frustration of the shark as I lower myself into the water and submerge into the silence.

I was staring off into the water with about 7-10 meters visibilty. I can only hear my heartbeat, cliche I know but I am about to see a 5 meter long Great White Shark, its beating hard. Just silence, water and adrenaline now… I stare as hard as I can. The silence was getting me worried, part paranoia and part hoping that the shark had not gone… Holy Shit… it swam underneath me from behind. No more than half a meter away, no sound just a graceful slide back out of sight. This time I am looking all around me not wanting to miss anything, behind me, below me, both sides. Still in the silence, I strain to see something, shadows keep getting my attention. One of the shadows forms into a darker shape that becomes the shark heading straight at the cage, it accelerates at an unbelievable rate towards me… my mask is the only thing holding my eyes in my head. 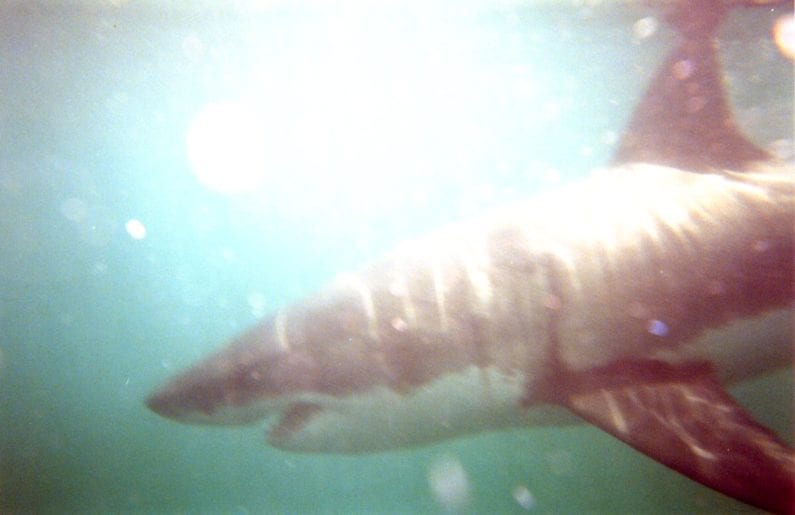 It’s mouth opens to clearly show rows of large sharp teeth. I watch in slow motion as the shark lunges for the bait, its power, aggression and grace all so poignant that I forget I need to breathe, somehow I managed to take some photos with the underwater disposable camera that we had bought. I still cant remember pressing the shutter or winding the film on but apparently I did. It is amazing how these creatures move so elegantly when they are so large. You can’t see or hear them coming till they strike. I hope that if I end up in the sea again with sharks, I am in a cage again because we dont stand a chance without one. After seeing the shark try to get the bait a few more times I hopped out of the cage to let the next person have a look; hoping I would get another chance to go in. 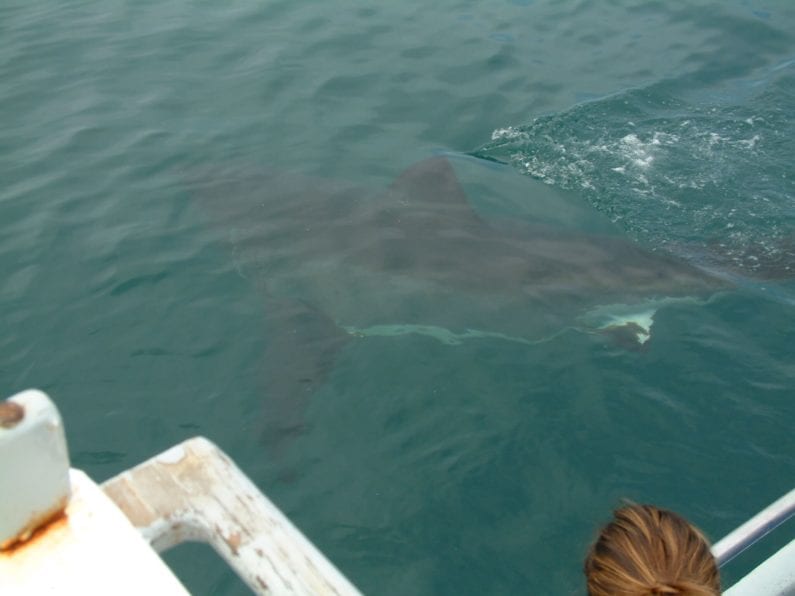 We saw a couple of other sharks whilst we were out there. All quite large in the 4-5 meter range. After I had been in the cage for a third time I got out and had the get the wetsuit off… I had been wearing it for most of the day. Towards the end of the trip one last shark appeared and no-one wanted to go in the cage… without hesitation I took up the offer. Although the guys on the boat thought I was mad and would freeze to death in the 14 degree celcius water, I went in without a wetsuit… there is only so much time you can spend in one of those. The water was actually warm in comparison to Guernsey so I was quite happy and without the extra buoyancy, I sank much more easily. I think I stayed in the water for about 10 minutes before the shark left. To see it swimming around and the way it preys on the bait was just as exciting as every other time I had seen it happen that day. Sharks really are amazing creatures. I got out of the cage as it was nearing time to head back to the shore and surprisingly everyone seemed a bit quiet, perhaps just reflecting on what they had experienced. 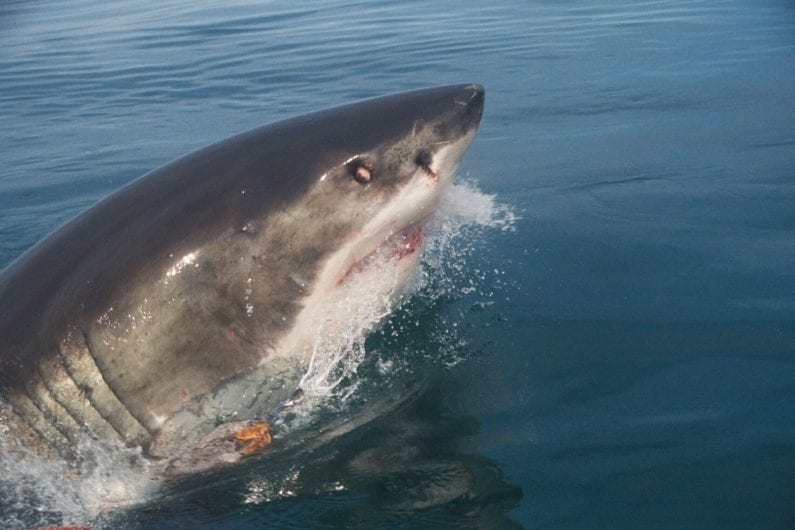 Landing back on the shore was literaly that! Expecting to stop at the pier so we could get off, imagine our surprise when we actually accelerated straight at the slipway. I had studied the boat that morning… it had no wheels. As I watched the trailer being reversed down the slip the thought ‘Uh-oh’ came to mind. Sure enough, full throttle onto the back of the trailer and away we go… driving up the slip to the car-park and cafe beyond. During the wait for the minibus, there were many excited conversations between everyone about the experiences of the day.