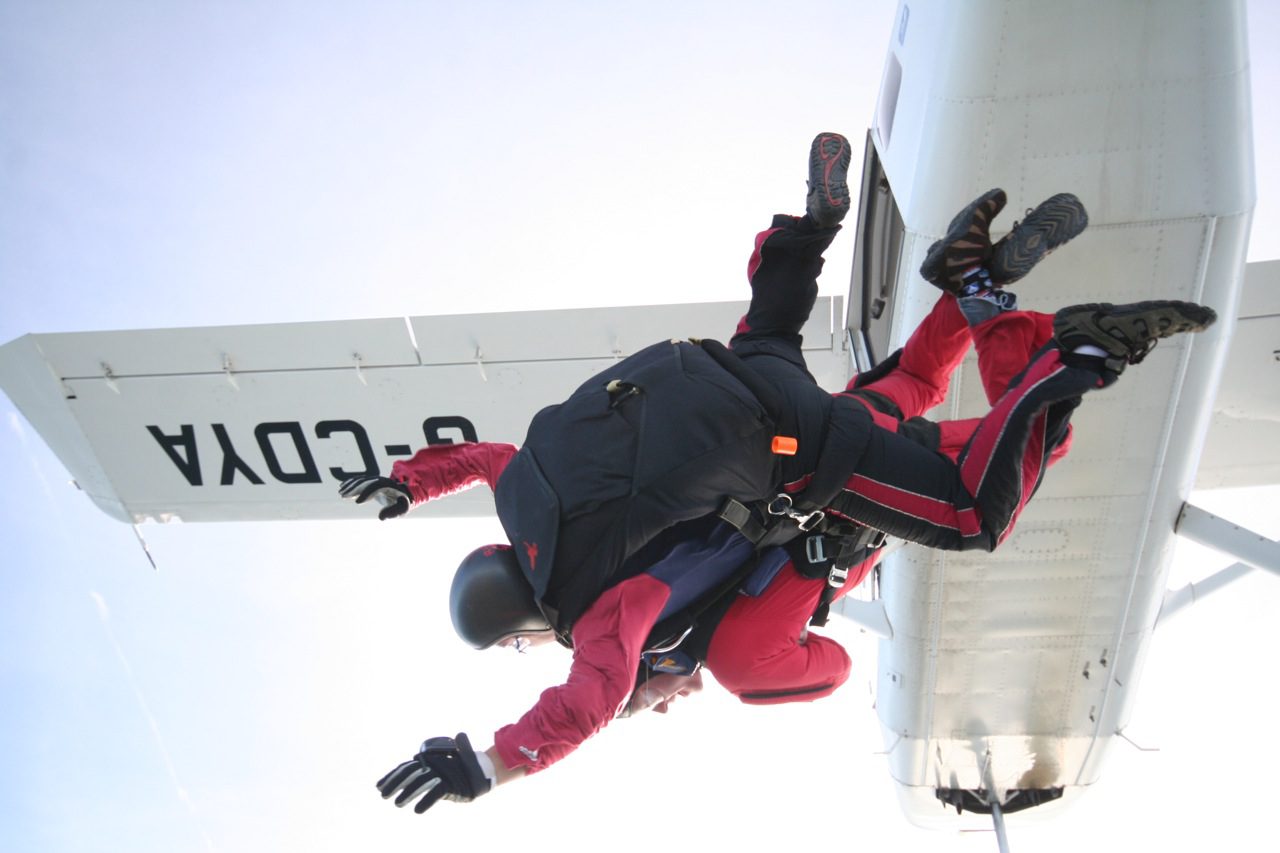 The Fast Way Down

After climbing 10,000ft in a small light aircraft, the door opened and we jumped out!! That’s another one ticked off the “bucket list”!

On our first lift, the cloud cover above the drop zone was beyond the safety limits of the jump so we had to head back to the airport. I hadn’t expected to land in that plane! It was a bit frustrating as we were waiting round for a couple of hours in the sunshine and the cloud remained thick right where we wanted to jump!

We decided to go to the shop for some food and drinks but, sods law, whilst we were there, the guys called to say we needed to kit up! Unsurprisingly, we rushed back, kitted up and boarded the plane again!

The flight takes about 25 minutes to get high enough. This time, we had perfect views across the whole island. There was not a cloud in sight! Compared to the previous attempt, the wait was well worth it. 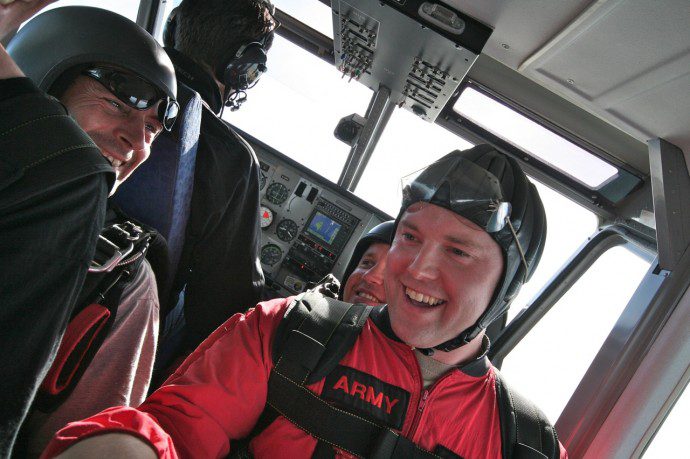 When we were given the 5 mile notice, it was time to buckle up to our teachers! We had to sit on their laps which proved much more comfortable than the floor! I asked if this was the First Class option which, apparently, it is for some! 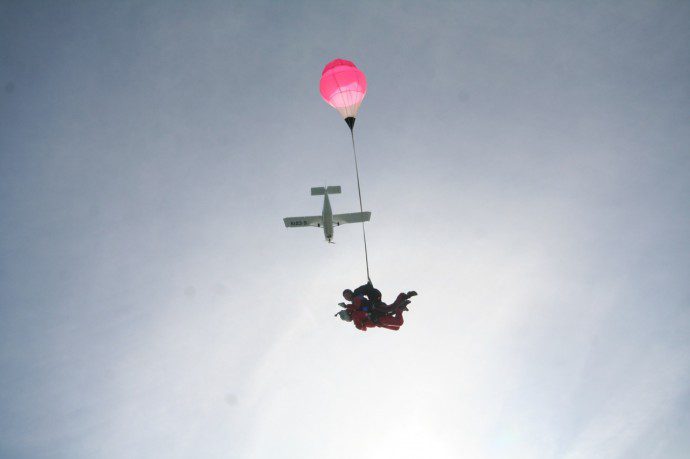 The door was opened and the plan was to shuffle up to the edge, put my feet under the plane, head back as far as possible… Then jump! 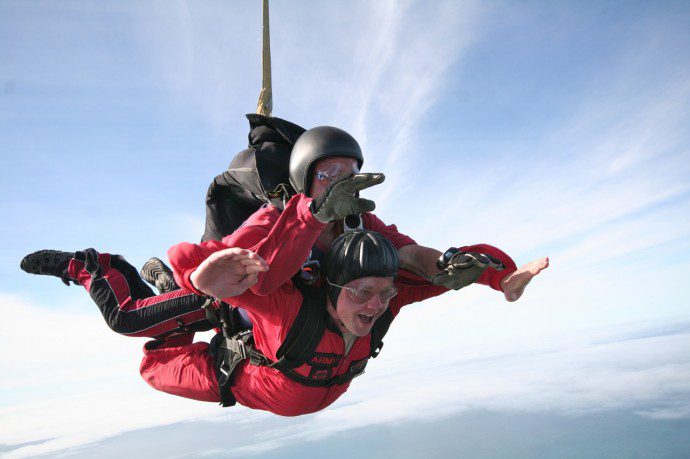 This went perfectly. The sensation of cartwheeling out the side was unlike anything I had felt before! When we were in control, the teacher deployed a drogue chute so that we slowed down to 130mph. This enabled the cameraman to get in nice and close. The free-fall lasted about 30 seconds and in that short time we fell nearly 7000ft! It was a really great feeling and one heck of a rush! 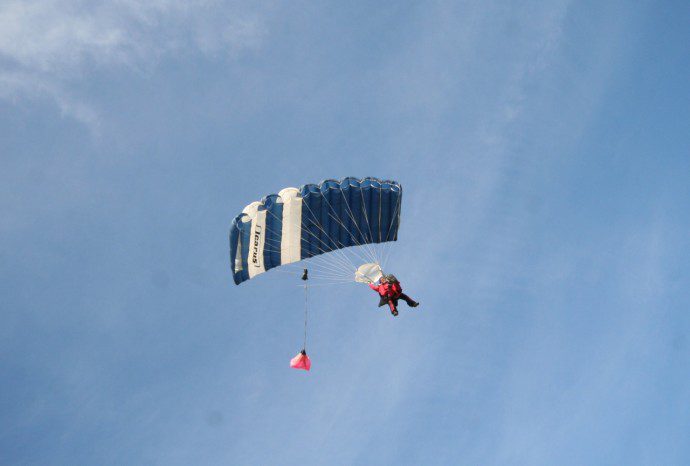 When the main parachute was released, we slowed down rapidly. It was possible to have a conversation and appreciate the views. At 3000ft with no windows, you can see the whole of Guernsey. Quite a distance below, I could see Leigh’s chute. After some excellent flying by Ed (the teacher), 5 seconds later we were alongside Leigh providing the perfect opportunity to shout and wave before they dropped away!

Flying around, suspended under the chute was awesome. The sensation of turning and falling is quite strange. That mixed with truly breathtaking views makes skydiving one of the most exhilarating things you can ever try. I didn’t know what to expect but I was surprised that it wasn’t terrifying! The sense of awe overpowered any other sensation!! 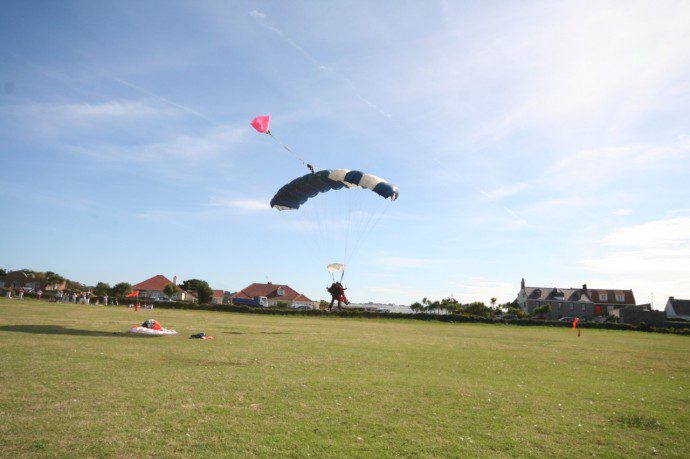 The landing was great! The ground seems to approach quite quickly but we came to a very smooth stop. No bangs or jolts! Ed clearly has some skills! The first thing I did was run across to see how Leigh was. No broken bones so far, we just had to wait for Dave to be dropped as he was on the next lift!

After we had waited a while, the call came that they had jumped. By this stage, the sky was covered with cloud again. Waiting patiently, we finally saw them in the clouds. It is quite strange to watch from the ground, especially when you know what they are experiencing at that time. He came in, landed safely and that was the end of our first skydiving experience! I say ‘first’ as I think I’ll be doing that again- skydiving is awesome!