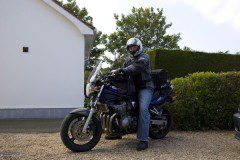 The trip up to Wales was interesting. We had plenty of time due to the early arrival of the ferry. This turned out to be a good thing because the GPS was set to avoid motorways. For the first hour or so, we were riding through foggy country lanes. When we realised we would not arrive till late in the evening, we stopped to tweak the comm systems and get ourselves on the faster roads. The highlight of the trip up was crossing the Severn bridge into Wales. Partly because of the amazing view and partly because Motorbikes go free!! 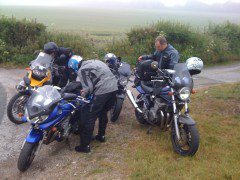 Though the navigator took a few wrong turns, we arrived at our hotel in Wales just in time for lunch. We unloaded all the luggage, changed out of our bike gear and sat down with a pint of Coke. Our plan for the afternoon was simple, find the BMW training centre so we knew where to go and then find some shops!

Finding the centre was quite easy. The map was a bit confusing but when we saw 30 dirty BMW bikes ride past, it was obvious where they were going. We followed them to the training centre and pulled over to make more adjustments to our radios. As we were testing, a muddy BMW pulled over to ask about our unusual number plates. The rider turned out to be Simon Pavey, a well known enduro competitor and owner of the Off-Road Skills centre. After a quick chat, we headed into Touratech which was in the same area to buy some souvenirs and drool over the bikes in the showroom, each kitted out with plenty of Touratech upgrades!

For the remainder of the afternoon, we went in search of an O2 shop. We got a few miles down the road (no sign of any shops) and stopped for a rest. At this point we encountered a problem with one of the bikes. Aidy’s cherished R1200 GS would not start. After a lot of phone calls to Technicians and BMW support, the problem was identified as the ignition immobiliser antenna which detects the key. BMW suggested moving the bike 20-30 meters away from the petrol station we were near, amazingly it started! Much relief and a spirited ride back to the hotel was called for so that we could sit in the bar and relax before the course. 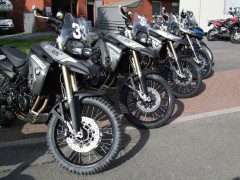 We arrived early the next morning to make sure we could get the gear we were hiring and register. This all went smoothly and soon enough we were being shown how the bikes work. Luckily, this only took two minutes and we were off. Twenty three BMW bikes heading off to Walter’s Arena, a 4000 acre private playground! 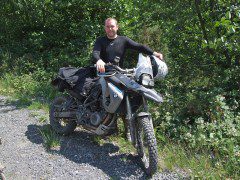 The first morning was spent learning the basic skills of off-road riding. Standing up, getting off and even how to pick the bike up, which was useful as nearly everyone had to do this at some stage! We had to ride round slaloms, learn how to skid both wheels and ride around inside a box! All these exercises proved to be really good fun and the only exception to this was the heat. Because we were dressed in motorcross gear and stopping all the time, we never had the chance to cool down! 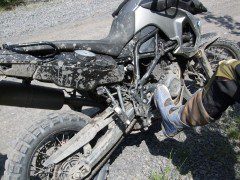 After lunch, it was very different. We were still in the process of learning, but this was done “in the field”, or more accurately, “in the forest”. We learnt about hill descents and hill recovery for ascents when it doesn’t go to plan. There was also a lot more riding through the tracks and trails which was great fun. I was feeling the excitement of mountain biking without the need to pedal up the hills! 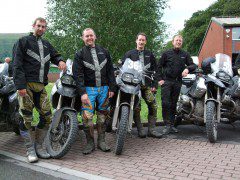 There was a group meal on the first evening at the Abercrave Inn, this meant we could enjoy a few Ales before walking to the rooms afterwards! It was a great opportunity to chat with the instructors and other participants about what had brought them along to the course. Zippy had some great stories to share about his Dakar experiences and crazy magazine photo-shoots, he also told us about an even called Mountain Madness which is a 2 day GPS-less orienteering event on bikes. We were so excited by the idea that we are going to sign up for the 2010 edition as soon as we get the opportunity! 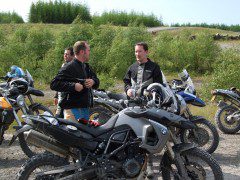 The second day involved a lot more riding about. We were still stopping to learn skills, but at least we were able to put what we had learned into practice throughout the day. Whilst practising momentum, one of our group had a bad fall and broke his ankle. It was in this time that you really appreciated the instructors abilities. Everything was handled calmly and, most importantly, properly. After lunch, we were given the opportunity to jump on any of the other bikes that we wanted to try. I immediately jumped onto the R1200 GS that Aidy had been riding as this was/is a real contender for my cash. Unfortunately, the short ride didn’t give me a chance to try it out properly and I found myself preferring the F800 GS more. Perhaps signing up for a “Day in the dirt” on the R1200 GS would be a good idea?! 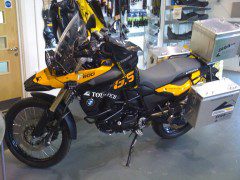 The ride home started with another trip to Touratech so that Aidy could actually purchase all the items he had tagged in the catalogue! It was quite a long stop and I was even tempted to buy the F800 GS they had in the showroom just so I would have something to do!

We were eventually under way and making for Southampton. With the usual wrong turns and bad GPS that “didn’t know where we were”, we arrived at our hotel late in the afternoon.

We had to rush showers and then head to the shops. Leigh didn’t manage to find an iPhone 3G S as the whole country was out of stock. Aidy got his replacement SIM card and then we all bought milkshakes! We decided that a bit of rest would be wise before heading out for food so we returned to the hotel via a very dodgy pub that had a decent selection of Ales on tap!

After a bit of a rest we went out and found an Indian restaurant where we could relax with a few cold Cobras! The food was great and most of the conversation revolved around the week-ends activities.When we all started to fall asleep at the table, we ventured into the humid fresh air and went to find a few more local pubs. Tuesday nights in Southampton are very quiet! The thought of the 100 mile ride and a 6AM start were playing on our minds but we managed to have a decent time out!

The early start was a killer, but we managed to get the bikes loaded up and on the road pretty much on time. We decided we would get a few miles done before stopping for breakfast as the traffic was already quite bad. As it turns out, we didn’t have time to stop for breakfast so we had to make do with ‘Red Bull’ and ‘Pepsi RAW’ when we stopped to fuel the bikes. 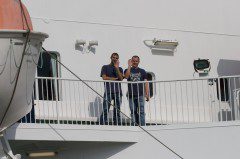 Eventually we popped out onto the Weymouth sea-front and we headed to the ferry terminal to check in. We had planned to get some food in the cafeteria, but we were loaded onto the boat straight away.

After the excellent week-end, we managed to stay awake for the whole trip talking about bikes and future adventures. The BMW course was so good, I am confident we will be going back, though, if I still have the same bike, I might take the car!

To finish off, here is a short video of what we got up to.