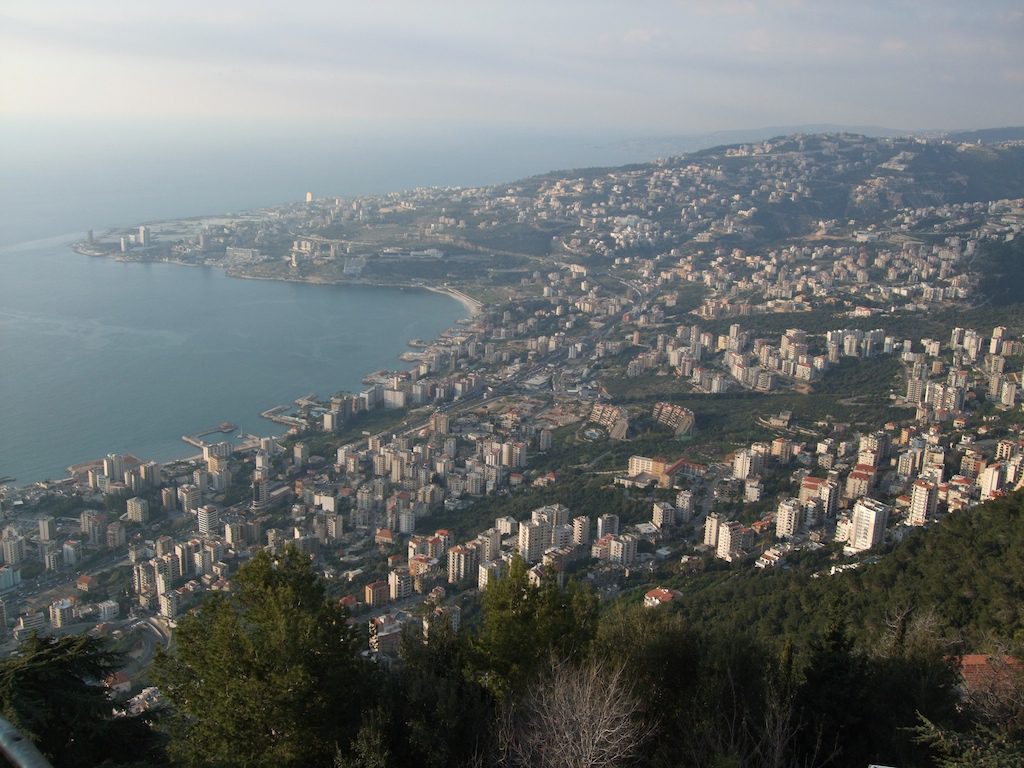 Lebanon is not a country I would have chosen if I were going on holiday. From the few days I spent there working, I can now say that I probably will not be returning. It wasn’t a bad place, but I just didn’t get it!

The point of my visit was to give a training course on sales skills, marketing and colour management. The flight down was great, we were seated in the Emergency exit of BMI Business Class. I had more leg room than on a BA Club World flight! Seriously – I was slouching right down in the seat and couldn’t reach the one in front. The service was great and I did a good job of drinking all the ale… again!

We arrived at the hotel quite late in the evening to discover that all the staff were having a party and therefore the bar was shut. The receptionist explained that we could get a taxi if we liked! As great as this sounded… dinner was provided by Pringles and other snacks from the mini-bar.

The next day after the course, we were taken to a nice restaurant where we ate lots of ‘special’ Lebanese food. It seemed like bread and salad to me but they were insistent that it was ‘special’! There were a couple of things that were very ‘special’ though. If you have ever eaten a whole bird, including the bones, you will know what I mean.

A local ‘specialty’ is the Fig bird! Nice taste but a bit crunchy for me! The ‘special’ coffee was apparently going to blow my face off because it was so strong. The fact it was served in cups the size of thimbles had me intrigued as to what the awesome power of this brew might hold. The aroma of cardomon was quite obvious, this is a ‘special’ Lebanese addition. As it turned out, it was just coffee; nice coffee, but not quite the donkey kick of caffeine and flavour I was hoping to experience!

The following day after work, we headed out to a big shopping mall. The cheap prices were more expensive than home but we did go for food in an ‘Italian Japanese’ restaurant, this was the first ‘special’ Lebanese thing I had seen. Sushi and Pizza- mixed together if you liked! As it was St Patrick’s day, we headed off to find an Irish bar. We found the best (smallest) taxi in the city. We went to a bar and watched policemen push the taxi down the road to jump start it. That was ‘special’ too! We were in an area where the road would be full of bars. There were a few, but I really get the feeling that the Lebanese people have a different measure of optimistic wishful thinking than I do. We eventually found the an Irish bar but when we walked in, it wasn’t very Irish. About half way through a bottle of beer I noticed that the sign on the wall implied we were not in the Irish bar at all, we had gone in the wrong door! As it turns out, we needed to go up some stairs as the Irish bar was above the random pub we were in. The Irish bar was full of Americans, quite surreal for the centre of Beirut!

The trip back to the hotel was an experience. From what I can tell, we were taken in a stolen BMW 330 Cabriolet at 100mph by a driver with two names, George and James, drinking a glass of Redbull and ‘water’! Needless to say, it was not a taxi and I doubt the owner knew that a valet man was hoofing around in his car!! We learnt later that taxis have red number plates… the BMW did not!

Our final day involved a morning of work then a little bit of sightseeing in the afternoon.

First stop was the upper caves of the Jeita Grotto. These were quite nice caves but much like others that you can find around the world. Full of stalactites, stalagmites and a convenient concrete walkway. As with every other similar place in the world, photography was prohibited. They took extreme measures to ensure you left cameras and mobile phones in a locker at the entrance. Seemed a bit much.  The caves have been nominated for the New 7 Wonders of the World… it did not reach the finals though.

Following on from the caves we went to see a big statue of Mary. I climbed up round the spiral base and when I reached the top, the view was superb (The big picture at the top of the post was taken there). Not being particularly religious, I didn’t experience any great epiphany and so I headed back down. I did feel different at the bottom though… tired! To celebrate the statue a big church had been built nearby. There were two other churches in very close proximity. I had the feeling we were in a religious area. This feeling was backed up by the heavily armed guards along the road. By all accounts they were protecting the homes of a powerful religious figure and some politicians.

Final stop of the day was an old medievel town. It is said to be 3000 years old. The markets in an old street are now walled with glass and sell the same cheap tat you can buy anywhere else in the world that you can find a market. It was a very pleasant place but I was starting to get a bit bored by this time. We had some food and then finally headed back to the hotel as we had an early flight the following morning.

When we were back at the hotel and had ditched the group, we headed to the bar for a few beers before bed. Feeling relieved we had got through the course again, we ended up celebrating for quite a while and when the bar closed, it was time to go pack.

At stupid o’clock the next morning, the Beirut adventure ended. I happily climbed aboard the BMI flight back to Heathrow. It was an experience in Beirut but I still don’t think it is somewhere I will return to for a holiday.